The original Smoky Hill River (Old River Channel) channel once flowed through the heart of Salina, Kansas, but after repeated flooding the channel was diverted out of town. The seven-mile long channel winds through Downtown Salina, past parks, near schools, and through residential areas. It was once an asset to the community providing recreational opportunities and economic opportunities such as producing power for local timber mills and grain processing. Today the entire seven-mile length of the channel serves as a stormwater collection area, receiving urban run-off from approximately five square miles (the area of the city is approximately 23 square miles).Most of the channel is overgrown with large trees, thick vegetation, and is underlain with up to 10 feet of silt. Fortunately for Old Smoky there is renewed interest in restoring the river channel. Members of the community want to bring water back to the channel in order to attract development and create recreational opportunities. The Friends of the River Partnership has been working for years to improve the river channel. In 2009 they helped create a River Master Plan that identified the need for a baseline water quality monitoring program.  Monitoring would help assess the feasibility of various redevelopment options along the channel. In addition to the on-going efforts of the friends group, the Pollution Prevention Institute at Kansas State University applied for and received a Community Action for a Renewed Environment (CARE) Level I grant from EPA for the City of Salina. With this funding, volunteer citizens researched and developed issue papers on environmental health issues. A stormwater issues paper noted that the lack of natural water flow in the river channel may cause contaminants to “build up” in the river bed. The stormwater run-off washes street debris, oil and

antifreeze from parking lots, potential contaminants from abandoned grain elevators, pesticides and fertilizers from residential and commercial lawns, pet waste, and other material such as trash into the channel through more than 70 storm drains.

KSU and Friends of the River Partnership

In 2012 the Pollution Prevention Institute at Kansas State University was awarded a $60,000 urban waters small grant from EPA, part of which was used to conduct water quality monitoring in the river channel in addition to engaging the public in the removal of invasive species along the river bank. Intended outcomes of their project include establishing an understanding of the pollutants present in the river and helping create a more informed public which understands the importance and process of maintaining the integrity of the river channel. Prior to receiving these funds, KSU had established a relationship with Friends of the River Foundation, a community organization. The mission of this group is to restore the natural channel of the Smoky Hill River to its role as an integral part of the aesthetic, recreational and economic life of Salina. In light of the funds received by KSU, it made sense for KSU to partner with Friends of the River, as well as the City of Salina, to achieve the goals of the community.

In order to develop an understanding of the water quality in the river channel, KSU is partnering with Kansas Wesleyan University. Biology students collect water samples and conduct analyses using Citizen Science kits. Some of the analysis happens on site and some takes place in the lab at KWU. The students are testing for -pH, temperature, turbidity, nitrates, nitrites, E. coli, total coliform, ammonia,

and phosphorus. One round of testing was completed in fall 2014, the second round will be completed in spring 2015. The data will be summarized and presented to the City of Salina’s stormwater management department with the hope that, when used with the city’s outfall systems map, they can begin to identify the sources of pollutants.

KSU and Friends of the River have partnered with the City of Salina at spring and fall community clean up events. At these events volunteers are trained by the city’s stormwater department on issues of water quality. Then they set out on foot to mark storm drains and place door hangars in neighborhoods to educate  residents on how storm drains are connected to the Old Channel and steps they can take to reduce pollution in waterways.  Additionally KSU brought in their State Extension Forester  to host training for community members on invasive species removal along the banks of the Old Smoky Hill River Channel.

The on-going efforts centered on the Old Smoky Hill River Channel have helped KSU, the City of Salina, and Salina community members better understand the current condition of water quality in the river channel and the condition of the banks of the river channel. Community members have been trained how to identify and remove invasive species without compromising the banks of the river channel and there is more attention being paid, community wide, to the health of the river channel.  A demonstration site is being developed to showcase what the channel could look like when invasive species and trash are removed and replaced with ground cover and shrubs to stabilize the banks. A partnership with the local Master Gardeners and a grant from the Greater Salina Community Foundation is supplementing the EPA Urban Water Small Grant. 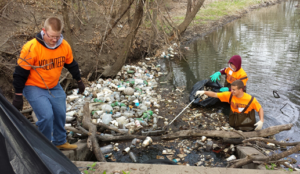