Proctor Creek begins in the western part of downtown Atlanta and flows westward through highly urbanized metropolitan areas before emptying into the Chattahoochee River, Atlanta’s main source for drinking water. As the largest city in Georgia, and the ninth-largest metropolitan area in the United States, Atlanta is covered with more than 20 percent impermeable surfaces. Downtown Atlanta, and the 19-square miles around it, is served by a combined sewer system with pipes that carry both sewage and stormwater to the same treatment facilities.

Combined sewer overflows (CSOs) are a known problem in Atlanta. Since 1995 when the Chattahoochee Riverkeeper sued the City of Atlanta for violations of the Clean Water Act, there have been improvements to the wastewater infrastructure. However, updating buried pipes is more difficult in heavily urbanized areas like Proctor Creek. Today, the Proctor Creek Watershed is still prone to CSOs, flooding neglected neighborhoods with bacteria laden waters. The headwaters of Proctor Creek rarely meet Georgia’s state standards for fecal coliform. In addition to poor water quality, the neighborhoods located in the headwaters of Proctor Creek – English Avenue and Vine City –  face other challenges that result in 40 to 50% vacancy rates and household poverty rates of 60%.

Through their Parks with Purpose program, The Conservation Fund works with many organizations and funding partners to create green infrastructure solutions around the country. They have a strong history of providing green spaces that are not only beneficial to the environment but also valuable to the community. In Atlanta, The Conservation Fund has been working for over a decade to complete more than 25 projects and protect more than 200 acres of green space in urban areas. The community is involved every step of the way through education and outreach as well as job training and workforce development.

Parks with Purpose projects in Atlanta are bringing to life a vision that started in 2009 when Georgia State Representative, “Able” Mable Thomas, approached Park Pride with an idea to create parks that prevent stormwater flooding in her community.  From this idea, and with cooperation from many organizations, the Proctor North Avenue Green Infrastructure Vision Plan (PNA) was completed in 2010. Since then, several of the locations identified by the study have been transformed. In partnership with Park Pride and a variety of community partners, The Conservation Fund completed two parks in the Proctor Creek Watershed, including expansion of green infrastructure in the Vine City Park and creating Lindsay Street Park, which was awarded EPA’s 2016 Rain Catcher Award.

In July 2016, The Conservation Fund established a steering committee of 20 community members who attended monthly planning and design charrettes. These charrettes allowed the community to share their hopes and concerns while The Conservation Fund shared information about flooding issues and green infrastructure solutions. Initial focus was on the Boone Park West project, a low-lying city-owned vacant lot located within the English Avenue neighborhood; the land was often flooded, unused and fenced off from the community. 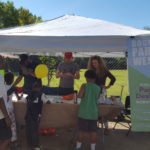 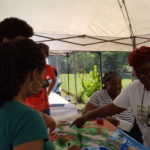 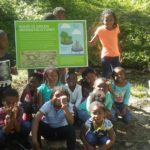 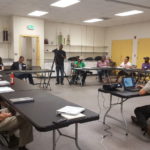 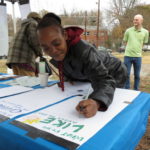 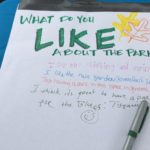 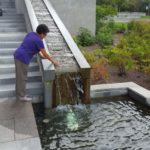 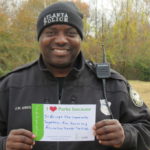 To get feedback from the broader community, The Conservation Fund and partner organizations attended several community events and hosted an event at the Boone Park West site in December 2016.  By May 2017, the Boone Park West Vision Plan was created by Park Pride in cooperation with the steering committee and approved by the English Avenue Neighborhood Association and the City of Atlanta Neighborhood Planning Unit-L.  EPA dollars ensured that the steering committee was able to speak directly with the design contractors – not only providing their feedback but also learning about geotechnical planning and the process of real-world engineering.

Boone Park West is estimated to have about 450,000 gallons of storage capacity and a total annual capture of 7 million gallons of water.

Official groundwork began on the park in March 2018!

To further engage the community, Community Improvement Association and Chattahoochee Riverkeeper hosted green infrastructure tours in July through November of 2017. Residents of the Proctor Creek Watershed observed firsthand different green infrastructure options, like detention ponds, bioswales, and rain gardens. This helped to steer their decisions for parks in their own neighborhoods. Additionally, college students, elected officials and health professionals attended the tours to learn about the benefits of green infrastructure for the whole community.

EPA funding also supported community education efforts. ECO-Action – in partnership with the West Atlanta Watershed Alliance and American Rivers – created the Atlanta Watershed Learning Network (AWLN). In April 2017, the AWLN hosted their first class for 20 residents from the Proctor Creek Watershed. Training topics included watershed science and green infrastructure, as well as advocacy and community empowerment. From this work with the community, AWLN published a newsletter that provides information about Atlanta watersheds and includes community voices. A second cohort of the AWLN began in April 2018 and is currently underway.

In all, the outreach and education phases of the Boone Park West Project engaged 200-300 community members. Members of the community and The Conservation Fund are actively engaged in a similar effort around Mattie Freeland Park, which is located less than a mile from Boone Park West and was created with strong leadership from community members. The Conservation Fund and partners are supporting the community leadership by adding green infrastructure components to the original Mattie Freeland Greenspace Vision Plan.

EPA Urban Waters as a Catalyst for Change

“The Conservation Fund is creating new parks and greenspaces that capture stormwater, increase community capacity, and improve overall quality of life in some of Atlanta’s most challenged neighborhoods.”

Through their Parks with Purpose program, The Conservation Fund puts people at the forefront of watershed science. Joining with residents and community organizations within the Proctor Creek Watershed, The Conservation Fund is creating greenspaces that improve the environmental health of communities by easing floods from stormwater runoff and increasing groundwater storage capacity. Residents are also educated about their watershed and empowered to make decisions that are beneficial to their neighborhoods. In this way, The Conservation Fund and partners are building capacity in communities to make way for lasting change. 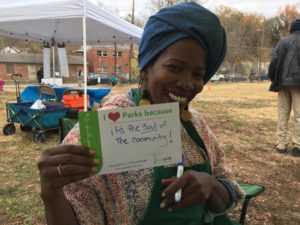 The Conservation Fund makes conservation work for America by creating solutions that make environmental and economic sense. They have worked in all 50 states to protect more than 7.8 million acres of land since 1985.