The Chattahoochee River drains more than 8,500 square miles and is the most heavily used water resource in Georgia. The river starts as a cold-water mountain stream and flows 430 miles to its confluence with the Flint River at Lake Seminole and the Florida border, traveling through the cities of Atlanta and Columbus, GA along the way. While its water quality has improved significantly in the last 20 years as the City of Atlanta made improvements to its sewer system, many of its tributaries flowing through Atlanta’s neighborhoods remain polluted with high levels of E. coli and other pollutants due to cracked and overflowing sewers, failing septic systems and stormwater runoff.

Like many waterways across the nation, a majority of these streams rarely receive routine water quality monitoring from local, state and federal government agencies. Therefore, the pollution sources in the watershed often flow unchecked for long periods of time – resulting in environmental degradation and public health threats.

CRK first began to “dabble” in volunteer water quality monitoring in response to neighborhood residents’ interest in monitoring their local waters so they could better understand the sources behind the odd smells and color they were seeing in the Tanyard Creek, a tributary of the Chattahoochee.

In response to neighbors’ interest, CRK trained local neighborhood association members to collect water quality samples. After analyzing them in a laboratory set up in their office, they confirmed high levels of E. coli, an indicator of fecal bacteria from sewage. CRK followed up by sampling all pipes flowing into the stream and discovered one pouring raw sewage directly into the creek. They worked with the City of Atlanta to fix the pipe, and local residents started seeing an immediate improvement in water quality in Tanyard Creek.

In their office, they confirmed high levels of E. coli, an indicator of fecal bacteria from sewage. CRK followed up by sampling all pipes flowing into the stream and discovered one pouring raw sewage directly into the creek. They worked with the City of Atlanta to fix the pipe, and local residents started seeing an immediate improvement in water quality in Tanyard Creek.

Building on this early success in 2010, CRK’s Neighborhood Water Watch (NWW) was formally launched as a way to engage and educate local communities while working to eliminate bacteria pollution.

Trained volunteers collect samples weekly by trained lowering Whirlpak bags from pedestrian friendly bridges using a PVC collection device and a line. They place samples on ice, delivering them to one of the three CRK labs within 6 hours of collection. Samples are analyzed by staff and interns using the EPA-approved IDEXX® Colilert® system, an easy and reliable method for detecting bacteria. All data is publically available through the CRK website and provided to the Georgia Adopt-A-Stream database and EPA’s STORET database. Sites with high readings are monitored further upstream, and CRK works with local governments to identify the sources of pollution, regularly conducting follow-up monitoring to confirm that the problems are fixes. CRK developed the Neighborhood Water Watch Guide to help others develop similar programs.

Over the past 5 years NWW has grown quickly through word of mouth, as a large community of individuals has surfaced to help protect their waterways. The number of samples collected has grown from 288 in 2010 and is on track to reach more than 6,000 samples across 100+ sites in 2015. Local municipalities engaged with CRK to fix the issues identified. The data collection is guided by an approved Quality Assurance Project Plan (QAPP) which was developed with support from an EPA Urban Waters Small Grant as part of the NWW’s expansion. CRK guides the work of individual volunteers plus those from civic and homeowner associations, schools, and universities. One such group, the West Atlanta Watershed Alliance (a past Urban Waters Small Grant recipient), monitors Proctor Creek which flows through an environmental justice community in Atlanta. In the CRK program’s short life, numerous sewer leaks have been reported and thousands of gallons of raw sewage have been prevented from reaching local streams and the Chattahoochee River. 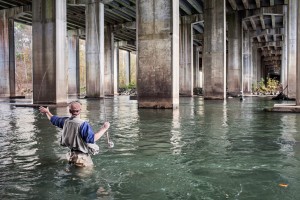 Chattahoochee Riverkeeper (CRK) is a non-profit, environmental advocacy organization located in Georgia with 7,000 members dedicated solely to protecting the Chattahoochee River, its tributaries and watershed.

CRK is a member of the Waterkeeper Alliance, an international coalition of 200+ Waterkeepers. CRK’s mission is to advocate and secure the protection and stewardship of the Chattahoochee River, its tributaries and watershed, in order to restore and conserve their ecological health for the people and wildlife that depend on the river system.