Anacostia is a historic neighborhood listed on the National Register of Historic Places, and is located in Southeast Washington, DC. Originally a thriving trade hub for Native American tribes, including the Iroquois and local Nacostine people (Burr 1920), it transitioned to “Uniontown” with residents supplying labor to the Washington Navy Yard (National Park Service).

Black and Irish residents were initially not permitted to settle in the neighborhood, but as the composition of the residents gradually evolved, it became home for many African Americans, including abolitionist Frederick Douglass. As of the 2010 Census, the historic neighborhood is composed of 94.9% Black or African American residents.

Industrialization and poor urban planning through the 1990s led to the eventual degradation of water quality and community life, and the Anacostia became a forgotten river. Fortunately, that is not the case today. The Environmental Protection Agency (EPA) Region 3 approved a Total Maximum Daily Load (TMDL) for trash in the Anacostia River in 2010, making the Anacostia the first interstate river in the nation with an enforceable trash limit. Additionally, a Long-Term Control Plan (LTCP), implemented by a 2005 Consent Decree with D.C. Water, provides for the construction of two underground tunnels to prevent sewage overflows during wet weather events from entering the Anacostia River. Upon completion of the tunnels, sewage overflow volumes are expected to be reduced by 98% for a typical year.

Groundwork Anacostia, a trust under the umbrella of Groundwork USA, is based in the District’s Ward 7, which has the longest portion of riverbank—including four out of the five tributaries that feed the Anacostia River. The neighborhood has a large amount of green space in the form of National Park Service (NPS) historical preserves, Civil War sites, and city parkland. Groundwork Anacostia’s main focus has been to improve this parkland, as well as local derelict lots and vacant land, in order to improve quality of life and access for neighborhood residents, while also offering innovative education and job training programs for area youth.

Each school has a Green Team consisting of 10 to 12 high school students between the ages of 14 and 18. The Green Team youth perform service learning projects to improve the Anacostia watershed, address neighborhood needs, and gain job skills in environmental restoration, community outreach, and more. They work primarily in their own neighborhoods, but as youths advance through the program they have opportunities to work on specialized teams. Over the years the Green Team youth have transformed numerous derelict spaces into parks, improved and connected trails, installed sections of pervious surface, planted approximately 200 trees, installed interpretive signage, incorporated recreational features such as workout equipment in city parks, and helped to bring a three-acre farm to the neighborhood. Through partnership with the National Park Service (NPS), the youth have also restored NPS parkland, and have been instrumental in getting members of the local community more involved in outdoor recreation and stewardship of local parks.

In 2013, Groundwork Anacostia received a Region 3 Urban Waters Small Grant from the EPA in the amount of $60,000. Groundwork Anacostia used the funds to integrate Green Infrastructure (GI) features into local sites to manage storm water runoff while also training Green Team members and young adults on the installation, maintenance, and overall benefits of GI.

In 2009, Washington D.C. became first in the nation to purchase and install a Bandalong Litter Trap, a litter collecting device invented by Storm Water Systems and first utilized in Australia. Installed in Ward 7 in the Watts Branch tributary, the trap quickly filled up with trash and, of course, did not function well without regular maintenance. D.C. then entered into an agreement with Groundwork Anacostia and the Anacostia Riverkeeper (http://www.anacostiariverkeeper.org) to maintain the trap, which required weekly clearing of debris as well as special maintenance after storms. Following the successful implementation of this pilot program, D.C. installed two more traps in 2012 and a fourth one this year (Personal Interview). Last year (2015), Groundwork Anacostia’s maintenance efforts kept 34,000 pounds of trash out of the river.

In addition to clearing each trap once a week and after each storm event, Groundwork utilizes the traps as an outreach tool, conducting tours and bringing in volunteers for regular service learning activities. The Watershed Protection Team—consisting of advanced-level youth from each Green Team—not only performs the maintenance but actively engages in outreach activities. The youth also learn scientific methods, gathering data on the amount and type of litter and providing the results to the District Department of Energy and Environment (DOEE). This consistent data gathering over a period of years has enabled reg-ulatory agencies to identify and target main sources of trash and pollution and has resulted in new legislation which bans some uses of styrofoam.

After learning about Groundwork Anacostia’s pioneering efforts, the Dog River Clearwater Revival installed their own litter trap in Mobile, AL. After trying several other models, they recently in-stalled a Bandalong. With regular maintenance, the Bandalong appears to be a success and was the subject of one of the field trips offered at River Rally 2016, which was held in Mobile.

Groundwork is proud of its accomplishments in the area of community engagement. Although Ward 7 had more green space than any other part of the city, most had been neglected, leading to unsafe conditions and lack of access. Local residents did not regularly utilize these spaces, and, preoccupied by other pressing concerns, did not see environmental stewardship as a priority. By working with youth and offering employment and training services, Groundwork has been effective in getting community members involved in nearby historical sites, parks, and waterways. The programs have introduced disadvantaged youth to the outdoors, the social and eco-nomic effects of environmental improvements, and careers in science and conservation. The youth have become passionate about these issues and, having gained practical skills through participation in various Ground-work projects, are going on to related fields of study in college and continuing to give back to their community. 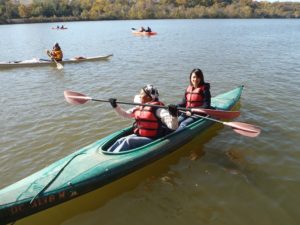