As a data-driven agency, the United States Geological Survey (USGS) brings science for decision-making to the San Antonio Urban Waters Federal Partnership. As a member of the Federal Partnership, the USGS is helping inform management agencies in the region about the effects of urbanization by monitoring water quality and water quantity. Taking the data-driven approach, Doug Schnoebelen—USGS Oklahoma-Texas Water Science Center South Texas Branch Chief—asserts, “[you] can’t manage what you don’t monitor.”

The San Antonio River Basin begins in Bexar County, Texas, where the sub-humid to semi-arid climate fluctuates between wet and dry conditions, and flash flooding is common. The underlying carbonate (limestone) rocks in the region are easily dissolved, creating networks for water to flow quickly into and through the subsurface. This type of geologic setting is characterized as karst topography and results in prominently interconnected networks of surface and groundwater resources. The Edwards Aquifer—a groundwater source that feeds the San Antonio River—emerges as springs in midtown and near San Antonio. Historically, these springs were inhabited by the Coahuiltecans, the collective name of the people indigenous to the San Antonio area. The pristine waters offered life to the native dwellers and attracted more and more European settlers, who began settling the area in the 17th century. Evidence of sophisticated water infrastructure—known as the acequias—is still present today at the San Antonio Missions.

Today, San Antonio is one of the largest cities in the United States with a population that is expected to double in the next twenty years. By protecting the seven different endangered species found in the Basin, the Federal Endangered Species Act helps to ensure there is sufficient water in the Edwards Aquifer so that major springs will not go dry, as they did in years past. Clean, abundant water is essential for both human and wildlife populations to grow. Several major agencies help to preserve and protect the water resources within Bexar County. These include the San Antonio Water System (SAWS), the San Antonio River Authority, and the Edwards Aquifer Authority as well as local governments, community groups and nonprofit organizations. As a way to ensure a sustainable water supply, SAWS expanded to include eight different sources for water in addition to the Edwards Aquifer system.

What started in 2011 as a multi-agency partnership to restore ten miles of the San Antonio River through San Antonio Missions National Park has since expanded with local and Federal support. By 2014, the San Antonio River Basin within Bexar County became a designated Urban Waters Federal Partnership Location. In 2015, with the designation of the San Antonio Missions as a World Heritage Site, efforts to restore the river gained further visibility as an important contribution to the overall cultural significance of the region. In addition to preserving the Missions, the Federal Partnership works to reconnect communities to their urban rivers through restoration at Elmendorf Lake Parks, Westside Creeks, and Olmos Basin Aquatic system. Today, the partnership extends to more agencies and organizations within Bexar County and includes such partners as the USGS.

Leveraging Urban Waters Federal Partnership Cooperative Matching Funds and in cooperation with SAWS, San Antonio River Authority, the City of San Antonio, and the USGS have created an Urban Hydrology Network (UHN) within Bexar County. The USGS and its partners want to understand relationships between surface-water runoff, groundwater recharge, and water quality, particularly in the urban sections of the Edwards Aquifer recharge zone.

“We want to understand how much water we have and how to monitor and predict the integrity of water quality into the future.”

These efforts will provide water resource managers with the data and information they need in order to determine if water protection measures are needed and what types of measures might be appropriate to ensure that the city’s water supply remains clean and plentiful. The technology required to do this is sophisticated; and the data collected from these sites and the information gleaned from these data are invaluable to the overall goals of the San Antonio River Basin Urban Waters Federal Partnership. 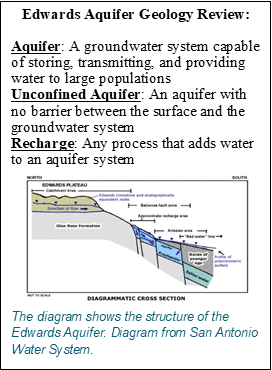 Continuous monitoring at the UHN sites began in 2013 and continued through 2019 at both groundwater and surface water monitoring locations. The network also includes “super gages” at which groundwater levels, stream flow, and water quality are all being measured in a single location. Real-time water-quality properties include temperature, dissolved oxygen, specific conductance, nitrate, pH, and fluorescent dissolved organic matter. Other constituents—such as nutrients, pesticides, and isotopes— are measured in water samples collected quarterly.

Tracking the presence and quantity of constituents that degrade water quality in the recharge areas provides important information about the vulnerability of the deeper groundwater, which is the source of drinking water for San Antonio residents. Analysis of data from the UHN indicates that stormwater runoff from flash floods caused a measurable increase in groundwater levels in the unconfined region of the aquifer in a matter of hours to days. At select sites, the UHN identified 33 different pesticides that were detected at least once across all the testing sites, with nitrate and pesticides occurring at higher concentrations in the more urbanized areas. [Find more information about sources and effects of pesticides and nitrogen in groundwater resources from the USGS Water Science School.]

Currently (2020), most of the constituents are present in very low concentrations and most do not exceed regulatory limits. However, the study shows that urbanization influences surface-water and groundwater quality in the San Antonio River Basin. The deeper part of the aquifer—the drinking water—takes longer to react to the runoff events compared to shallower parts near the recharge zone. There are implications that what happens now may have potential long-term negative effects on the overall water quality of the system.

On the Horizon for San Antonio: Water Equity Task Force

In 2020, the San Antonio River Basin Urban Waters Federal Partnership is embracing the goal of water equity by becoming part of the U.S. Water Alliance’s Water Equity Task Force. SAWS will join this national effort to bring equity into water infrastructure decisions by engaging local utilities, stakeholders and partners to understand water equity issues and to create a roadmap of actions to address them. The ultimate vision is ensuring safe, reliable, and affordable water to all people nationwide.

More from the USGS: 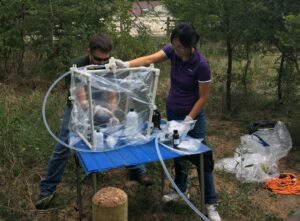 Water information is fundamental to national and local economic well-being, protection of life and property, and effective management of water resources. The USGS Oklahoma-Texas Water Science Center works with partners in Texas to monitor, assess, conduct targeted research, and deliver information on a wide range of water resources including streamflow, groundwater, water quality, and water use and availability.