Los Angeles River? That’s right, this highly urbanized, concrete channel is not the first thing that comes to mind when a person thinks about nature in Los Angeles (LA). Once wild, supporting the Tongva American Indian Tribe, the river had been channelized by the mid-20th Century for its entire length from the San Fernando Valley to the port at Long Beach (about 51 miles). Today, a staggering one million people live within one mile of the river.

The river is formed by two different creeks; Bell Creek from the Simi Hills (northern watershed) and Arroyo Calabasas from the Santa Monica Mountains. These two creeks converge at Canoga Park which is the technical start of the LA River. There are only two portions of the river that are not completely paved over. An 11-mile stretch known as the Glendale Narrows, which runs east and south along the edge of Glendale, CA and a stretch along its last few miles in Long Beach. The river is entirely surrounded by dense residential development, however only in some areas is it accessible to residents via pedestrian and bicycle amenities.

Youth from different areas in Los Angeles are creating positive change along the LA River through the River Ambassador program; a youth leadership and education program of the Mountains Recreation and Conservation Authority (MRCA). Since 1985 MRCA has provided free bus transportation to natural parks from low-income areas of Los Angeles through their Transit to Trails program. This says a great deal about the mission of the MRCA. The organization is devoted to bringing attention to social inequities related to the access of natural parks and resources. MRCA works to ensure access to these places for all people.

Recognizing a lack of diversity in the parks around Los Angeles, MRCA came up with an approach to address this. In addition to providing free transportation to parks, they have built parks in the heart of many lower-income communities, they provide a Youth Leadership Series (YLS) for underserved youth that fuses traditional outdoor skills with team-building and leadership skills to inspire a new generation of stewards and, to directly address the lack of diverse park staff, the MRCA has developed the Bridge to Park Careers program. This program is a unique approach to engaging urban youth who have traditionally been left out of the park agency field. The program facilitates urban youth in acquiring a competitive skill set within the parks. Most recently MRCA developed the River Ambassadors (RA) Program.

MRCA wanted to try out a program that was focused solely on the LA River and the factors impacting the health of the river. With EPA Urban Waters funding, MRCA was able to make this a reality.

The River Ambassador’s program, adapted from the Naturalists Explorer Program at MRCA, is being funded for two years and is designed to connect youth with their river. It is also designed to involve the teachers at each of the high schools that are participating.

The first component of the RA program will include a series of training sessions, led by MRCA naturalists, designed to empower urban youth to become River Ambassadors. Session topics may include Watershed Health and Conservation, River Ecology, Impacts of Community Greening, Strategies for Community Outreach, and Career Development. The second component of the RA Program is “Community Outreach of River Ambassadors.” This component ensures that the youth develop skills to share their knowledge with their local community. The ambassadors will create outreach presentations and conduct river walks for local schools and communities. Outreach topics will include water quality awareness, community greening, recreation opportunities, and access to the River.

There are two groups of youth being engaged; year one and year two students. Each group comes from a different high school near the LA River and each group focuses on a different part of the river. The first year ambassadors came from the Environmental Science and Technology High School; a charter school near an area of the river known as the “Glendale Narrows;” a soft-bottom section of the river. The second year ambassadors, from Reseda High School’s Science Magnet school, are focusing on a concrete channelized section of the river near its headwaters in the San Fernando Valley. These two groups of youth have had different experiences with the river given the difference in condition of the river in their respective neighborhoods.

Many local youth participating in the RA program come from lower-income, park-poor neighborhoods adjacent to the Los Angeles River. These communities, in the LA River Corridor, have higher poverty rates than other communities throughout Los Angeles and bear the burden of various environmental justice obstacles including physical and transportation barriers to accessing the river and other green spaces.

MRCA chose to work in these communities and choose to partner with schools that are underserved because one goal they have is to break down the barriers that exist to accessing parks and greenspace in Los Angeles. Many of the barriers exist in the lower-income, underserved neighborhoods in the Los Angeles River corridor. MRCA has a desire to create a more diverse parks system in terms of staff; helping connect Los Angeles youth to the river and other green spaces, where they will learn about natural and cultural resources, is a way to not only build stewardship, but it opens up potential career that the youth may never have considered before participating in the River Ambassadors Program.

Upon completing a trip lead by the River Ambassadors, and after reflecting on the experience, a second grade student exclaimed “This is the future!” He was describing a drawing he completed that showed what the river could look like if it was healthy enough to support plants and animals.

The youth are the future of our environment. Exposing urban youth to their urban rivers can be a life changing experience for them as they set out to create positive change for river ecosystems.

The desired outcomes of the River Ambassadors Program include, but are not limited to the following: increased education, engagement, and empowerment of local, underserved youth and communities regarding water quality issues and community greening issues and benefits; increased knowledge of actions that can be taken by individuals to prevent and reduce nonpoint source pollution and protect and restore urban waters.

In the first year of the program, the River Ambassadors used their newly gained knowledge about the LA River and river ecosystems to education their peers and younger students; lead camping and scavenger hunt trips along the river, and lead art series in order to help create awareness about the LA River.

Upon completion of the River Ambassador program, all youth were eligible to apply for paid, part-time staff positions as “Outdoor Leaders” with the MRCA. Four River Ambassadors were hired as Outdoor Leaders at the end of their program in Spring of 2015. They will assist full-time MRCA Naturalists on public programs, bus trips, outreach events, and campfire programs. The position will continue as long as the students are interested in working with the MRCA, including into the academic year.

MRCA would like to point out that the four students did an exemplary job last summer assisting with many programs at locations in the Santa Monica Mountains and along the Los Angeles River.

Additionally, though EPA funding for the LA River centered programming expires in 2016, thanks to a motivated group of year one River Ambassadors, the RA program is set to continue beyond 2016. The students who participated in the year one RA program, and some of their friends who became interested in the program, joined together to submit an application to the MRCA asking for a continuation of the program at their school. They used the community engagement skills and public speaking skills that they gained during the program to approach MRCA about extending the program. MRCA considered their request and is going to continue skills-based nature programming during the students’ high school lunch hour. They are able to extend the program by using existing, youth education program funds. So, while the lunch hour program is a modified version of the two-year long RA program, it will continue the discussions and focus areas of the original RA program while addressing specific topics of interest to the students. This will be a student-led program with support from MRCA’s specialized staff.

With the graduation of the first year River Ambassadors behind them, MRCA is looking toward the second year of ambassadors and their extended lunch hour programming. From the first year, MRCA learned the importance of being adaptable to student schedules and of flexibility of program content for different communities along river and different river ecosystems. With these lessons learned, MRCA provides the following advice for others who may want to pursue similar projects:

Student-led projects are most impactful in terms of how communities relate to and perceive park and river spaces.

The next generation will be our leaders and they are eager to learn and to be challenged. Plan to have follow-up projects for students to work on after the initial program ends. 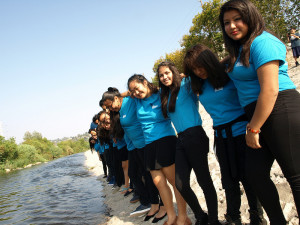 The Mountains Recreation & Conservation Authority is dedicated to the preservation and management of local open space and parkland, watershed lands, trails, and wildlife habitat and is and is one of the lead agencies providing for the revitalization of the Los Angeles River.