The City of Newark was built along the banks of the Passaic River. In 1983, the Ironbound neighborhood was one of the first in the nation to be designated as a “superfund site” for dioxin along the Passaic River. The Ironbound, named for the metalworking industry or from the network of railroad tracks in the neighborhood, is multi-ethnic, highly diverse, and working-class, where English, Spanish and Portuguese are common. It’s been called “Dutch Neck,” “Down Neck,” or simply “Neck,” due to the curve of the river. Industry developed along the river, cutting human connection and views to the river. Over time hardly anyone knew it was there. Most residents still think of the river as highly toxic.

Myriad of Activities Reconnecting “Newarkers” to Their River

Alongside efforts to clean up the river, ICC has a 30-year history in advocating for the development of parks along the river to provide access to a riverfront that had been off-limits due to pollution for over a century. In 2012, after years of community based planning, advocacy and fundraising, ICC celebrated the opening of the first 15-plus acres of the beautiful new Riverfront Park. With funding from EPA’s Urban Waters program (2012-2014), ICC has been able to expand their efforts to educate and activate the residents of Newark through community programming in the new park. Here are some of the initiatives they use to engage young people, residents and businesses with the Passaic River and the riverfront parks:

ICC has informed and empowered residents who continue to fight to make sure that the river is cleaned up and the waterfront is accessible to all residents. Three decades later, ICC still monitors this issue while embarking upon a community-wide waterfront vision to restore the river for recreational and ecological purposes. 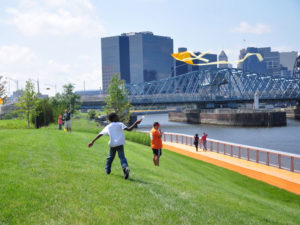 Founded in 1969, Ironbound Community Corporation (ICC) has been involved with efforts to revitalize the Passaic River for decades. They were founding members of an advisory group for superfund cleanup. Dioxin-contaminated land in Ironbound was cleaned up in 1986, but river clean-up did not begin until 2012. ICC strongly advocated for local jobs and over a dozen Ironbound residents were successfully trained and employed in this process. ICC continues to facilitate community involvement in the clean-up and received the EPA Region 2 Administrators Award for Excellence in April 2014.