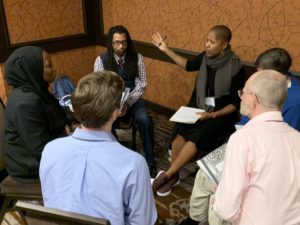 This was the starting point for the Urban Waters Learning Forum workshop—Addressing Racial Equity in Environmental Spaces—held on Friday, June 21, in Cleveland, OH. Nearly 40 people gathered in a conference room in the Westin Downtown Cleveland for a morning with the Urban Waters Learning Network. The facilitators for the workshop, Darryl Haddock (West Atlanta Watershed Alliance) and Jennifer Arnold (Reciprocity Consulting LLC), began by setting an intentional tone: “…we recognize that we all come at this work from different perspectives and life histories. It is emotional work that requires grace, patience and a sort of tough love. It takes all of us working together to make a difference.”

Rather than societal, the workshop focused on personal, interpersonal, and organizational racial equity. Without providing specific answers to questions raised throughout, the workshop was designed to have people think about how they can create actions in their own communities to foster change. 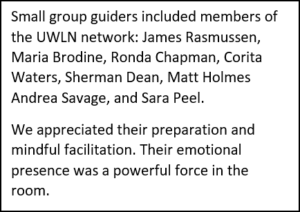 To set the stage for small group discussions, Haddock and Arnold shared a video clip from Dr. Camara Jones (minutes 3:14 – 6:55) about her OPEN/CLOSED sign analogy for institutionalized racism and white privilege. Those inside the restaurant—the privileged—see the “open” sign and lack awareness of its two-sided nature; at the same time, those outside the restaurant—historically marginalized communities—are acutely aware of the two-sided nature as well as the reality that it largely reads “closed” for them.

Facilitated by small group guiders, workshop participants formed groups of about five people to discuss how the analogy is relevant in their personal lives, in environmental spaces, and in their organizations. Some questions addressed, included: “Who is the door open for?” and “Does the community see an open or closed sign even if they’ve been invited to participate?”

In the same small groups, the participants were shown a list of traits emphasized in dominant white culture: 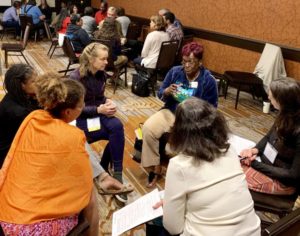 Participants reflected that these are not necessarily bad traits to have but recognized that there are other traits that organizations should also value to be more diverse and inclusive.

Of importance to this discussion was the role in which funders play, who gets funded, and how the funded organizations interact with the communities in which they work. In reference to the Urban Waters Federal Partnership locations, one participant remarked, “Mainstream white America has made decisions about where the money goes. Twenty locations are better than one. We have started. The conversation is out there. Now, we need to build on it.” 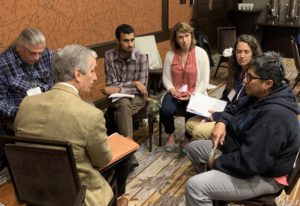 After a short break, participants formed new small groups with a different guider to discuss one of two scenarios that provided examples of how institutionalized racism shows up in different environmental spaces:

Within the small groups, participants were able to share their ideas of how institutionalized racism exists in the examples as well as share their personal stories and/or experiences with similar real-life examples. Among the reflections from both groups, there was agreement that making connections and building relationships is imperative. In reference to the Urban Waters/Wild & Scenic Waters divide, a workshop participant asserted that “the issues aren’t separate, we are stronger together.”

The workshop concluded with the participants and guiders together again as one large group. Each person received a copy of the Continuum on Becoming a Multicultural Anti-Racist Organization and was asked to consider their organization’s place on the continuum.

To move what was learned in the workshop into action, each participant was given a note card to write an action as well as a timeline for the work, with the understanding that one of the facilitators or guiders would check in on their progress. Some inspiring commitments came from this activity, such as this one from a workshop participant: “I’m going to walk through the ‘Continuum on Becoming a Multi-cultural Anti-racist Organization’ with my board, have discussions and determine how we get there. This will be part of our strategic planning effort.”

Reflecting on the day, several participants shared that they felt supported, many wished for more time and a deeper dive into personal mindsets, and one regarded that her “brain was pried open.” In his concluding remarks, Haddock expressed his desire for a “shared humanity” in which people authentically love and care for each other, after which his daughter—Candice Haddock—read the Nikki Grimes poem, entitled Truth:

The truth is, every day we rise is like thunder—

a clap of surprise could be echoes of trouble or blossoms of blessing.

You never know what garish or gorgeously disguised memories-to-be

Claim that cloud with the silver lining.

Our job if you ask me, is to follow it.

See where it heads.

For further resources from this workshop, visit our resources document. And stay tuned for more opportunities to engage with the UWLN on this topic in the future.