With a strong background in youth engagement, Rocking the Boat is a nonprofit organization in the South Bronx that supports kids’ growth through hands-on discovery. What started as a boatbuilding after-school program has grown into a multi-pronged approach for youth empowerment in an environmental justice community.

The Bronx River—once used as a drinking water resource—is the only freshwater river in New York City (NYC). The river flows southward through the Bronx, ending in the Hunts Point neighborhood and draining to the East River, a saltwater tidal estuary that connects to both the Upper New York Bay and the Long Island Sound. Hunts Point is the only neighborhood in NYC that is surrounded by water on all three sides. Instead of accessible waterfront properties, however, the neighborhood has little green space and hosts multiple threats from industrial, municipal, and residential pollution. During heavy rains, bacteria and other pollutants are carried through the Bronx River via the City’s combined sewer overflows (CSOs). As Hunts Point is at the end of the river, the neighborhood also receives pollutants from the often more affluent areas upstream. With a majority of Latino and black residents, a ranking as the poorest congressional district in the country, a 59% poverty rate for children, and high unemployment rates, the South Bronx is a prime example of an environmental justice community.

Founded in 2001, Rocking the Boat (RTB) is a nonprofit organization that began as a boatbuilding program for high school students. Over the past 20 years, the program expanded to include sailing, environmental, and social work programs for youth as well as on-water classroom, community rowing and sailing, and two camp programs for the public. The model is unique, and as the RTB slogan proclaims: “At Rocking the Boat, kids don’t just build boats, boats build kids.”

The environmental program started in 2002 and includes water quality monitoring, bird and fish surveys, and restoration. For each of the programs, the students are paired with external environmental professionals and scientists. Funded by an EPA Environmental Justice Small Grant in 2017, RTB expanded water quality work to include pathogen monitoring in cooperation with the Bronx River Alliance. With additional funding that same year from the New York State Department of Environmental Conservation, RTB purchased lab equipment to process the samples so that students can see the progression through from start to finish. 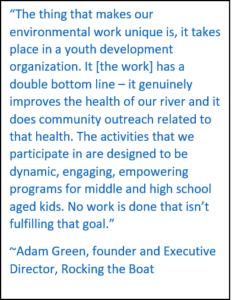 Because of the persistent problem of CSOs spilling raw sewage into the Bronx River, it is important for the community to understand and monitor the presence of pathogens in their water. During rain events, the level of Enterococcus—an indicator for pathogens in both fresh and saline water—increases to almost 30 times the Bronx River average; these are levels far beyond the EPA’s limits for secondary contact.

Read more about similar studies and the significance of Enterococcus in the Lower Hudson River in this Urban Waters Learning Network Impact Story.

Starting in September 2017 and continuing today, RTB’s Environmental Science Program participants receive instruction on pathogen monitoring. The training includes background information, techniques for sample collection, and direction for processing the samples in the lab. Water quality samples are collected twice weekly from two locations near Hunts Point Riverside Park (and two additional locations during the summer months). One of the sites is accessible only by boat, allowing students to use the boats built by their peers in the Boatbuilding Program and to apply their boating skills to collect samples.

Using the data collected in recent seasons through the pathogen project as well as a wealth of records dating back years, the students interpret what they have observed. Relating the presence of Enterococcus to the effects on fish and bird populations, for example, helps students to understand human influence on the environment and the interconnectedness of ecosystem health. RTB youth share their findings at community events and present their thoughts on how best to address the water quality problems in the Bronx River. The results of the water quality monitoring are also available on the Bronx River Alliance water quality website.

RTB continues to expand its environmental and water quality programming; most recently, students have begun to monitor microplastics. 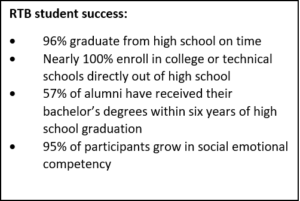 The heart of RTB’s work can be described by Audre Lorde’s statement: “There is no thing as a single-issue struggle because we do not live single-issue lives.”

The work of RTB is addressing environmental injustice in the Hunts Point community by integrating social and recreational opportunities with projects for a whole-health approach to “building” kids. As a result, the RTB youth are actively involved in informing others and solving the issues present in their neighborhood. Using a multi-pronged approach is good for youth, good for the river, and good for the entire community. 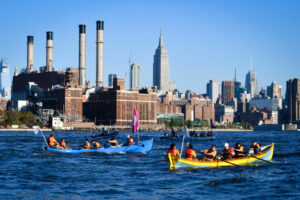