Once a part of the vast expanse of the Everglades wetlands, Broward County, Florida was first thought by settlers to be uninhabitable. Draining wetlands and building near the coastline made population increases possible. Today it is home to over 2 million people, and the 24 miles of beaches include cities like Fort Lauderdale, Lauderdale-by-the-Sea, and Hollywood. But the area is increasingly vulnerable to the effects of sea level rise and extreme storm events due to climate change. To help residents and decision-makers prepare for these changes, Broward County hosts an online climate toolbox that includes numerous resources, including vulnerability assessments for major municipalities within the county.

A 2019 report by the Florida Department of Environmental Protection (DEP) classifies 21.3 miles of the Broward County coastline as critically eroded. Since the 1960’s, the beaches have been managed through ongoing beach nourishment projects to protect the shoreline. Historically, these projects have favored restoring broad beaches for recreational purposes without much attention to the restoration of dunes. Because sand dunes populated with native vegetation act as natural buffers that protect the shoreline and adjacent properties from the effects of sand inundation or erosion, extreme storm events, and sea level rise, Broward County has committed to increasing the presence of dunes from 60% to 80%, making dune restoration an essential part of coastal resilience and the beach nourishment process.

Organizations in Broward County have long recognized the importance of restoring dunes as part of protecting the community and beach nourishment projects. The goal of the Youth Environmental Alliance (YEA)—a community-based education and restoration non-profit organization—is to create a 100% continuous dune line with native vegetation on the beaches of Broward County and beyond. And while they do a lot of work educating and empowering youth to be a part of the solution, Kristen Hoss, Executive Director of YEA, stated, “we cater to the young and young at heart.” In this way, they provide a sense of ownership and responsibility for reclaiming the coastline to the whole of the community.

“…to make change, we have to focus on everybody…one connection that we make can evolve into something much bigger.” ~Kristen Hoss, Executive Director YEA

YEA started restoring dunes in their community in 2013 and were awarded a competitive National Fish and Wildlife Federation (NFWF) grant to further support their work in 2014. In 2016, YEA partnered with HandsOn Broward to create Project Reclaiming Our Coastline (ROC). HandsOn Broward has a large volunteer base; and this partnership increased restoration projects from four per year to an average of 20 per year. In 2018, with funding from a NFWF Five Star and Urban Waters Restoration Grant, Project ROC partnered with more organizations and entities in Broward County and expanded south into Miami-Dade County.

Volunteers for Project ROC are recruited through online calendars and promotion as well as public outreach at schools and events by each of the organizations and agencies involved. Volunteers include public school students, general community members, corporate employees, and government officials. Since June of 2016, Project ROC has engaged 3,542 volunteers to complete 61 restoration projects and plant nearly 130,000 native plants (including sea oats, salt marsh grasses, and mangroves). In total, eight acres of coastal habitat has been restored in locations like Hollywood, Lauderdale-By-The-Sea, and Deerfield Island Park.

As a part of the restoration, Project ROC volunteers also learn about the ecological and economic importance of their work. Volunteer surveys show that 100% of respondents reported increased knowledge after participating in a Project ROC restoration event; and, participant comments indicate that the volunteers are spreading the word.

“I really enjoyed learning about the purpose of planting the sea oats and learning that they are our first line of defense when it comes to storms. I felt honored to be able to help restore the dunes in my city, and I was even more excited to share what I did with friends, family, and students…”

It is important not only to educate youth and the community about the benefits of dune restoration but also to make connections with municipal leaders, other professional associations and private homeowners. Engaging the people that are in direct ownership and control of the land is an essential part of the work done by Lee Gottlieb—YEA Director of Community Outreach—who attends commission and task force meetings (like the City of Hollywood Dune Master Plan Task Force) and professional conferences (like the Florida Shores and Beaches Preservation Association Conference).

While most of the beaches in Broward County are critically eroding, prioritizing dune restoration especially following beach nourishment, provides a critical defense against rising sea levels and extreme storm events while protecting local investments and recreating critical habitats. The restoration work of Project ROC is rewarding and educational for volunteers. In addition, public outreach has set the stage for more people, organizations, businesses, and government agencies to get involved with and take responsibility for reclaiming the coastline. Community engagement and multi-sector partnerships strengthen Project ROC, allowing YEA and its partners to make Broward County a more resilient shoreline community. 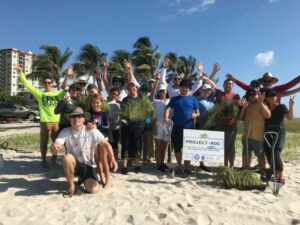 The Youth Environmental Alliance mission is to deliver education programs and facilitate participation in environmental activities to diverse persons of all abilities.