Elizabeth, New Jersey is a densely populated river city, founded on the Elizabeth River in 1664 as the center of commerce for Elizabethtown. The river served as a highway for ships, allowing them to navigate 2.5 miles inland. The river also flows into the Arthur Kill, a tidal river channel separating Staten Island from mainland New Jersey and forming part of the Arthur Kill complex watershed.

In 1912, Union County hired the prestigious Olmsted Architectural firm, resulting in a master plan that would eventually connect all of the county’s parks through a network of trails, Union County was the first in the country to incorporate its parks into such a system.

FLOODING CHANGES THE RIVER:
The Elizabeth River flooded frequently due to rain storms and tidal ebbs and flows. Though this feature made the river an excellent natural source of irrigation for adjacent farms, the floods became hazardous as the riverbanks urbanized. The consistent inundation of areas surrounding the riverbanks directly affected the Olmsted plan of introducing trails alongside the waterway. In the 1970s, the Army Corps of Engineers channelized the river, building walls and berms which removed recreational access along the river while drastically reducing natural habitat. Though the river no longer flooded, its role in public life diminished with lost opportunities for people to fish, swim, and enjoy the river. The connection between the Elizabeth community and the river appeared lost.

Bringing the River Back: The Elizabeth River Trail Project

Founded in 2003, one of Groundwork Elizabeth’s main goals was to re-establish recreational access along the Elizabeth River, provide new opportunities for education and community engagement, and restore some of the natural habitat for native plant and animal life. To accomplish this, Groundwork partnered with the New Jersey Department of Environmental Protection’s Green Acres Program, the EPA Office of Brownfields and Land Revitalization, the National Park Service Rivers and Trails Conservation Association, the City of Elizabeth, and Union County, eventually leveraging funding from the Transportation Act of 2006 as well as other sources to develop the Elizabeth River Trail. In 2006, Groundwork Elizabeth began to oversee a network of stakeholders and partners to move the project forward. Phase I of a multi- stage trail project alongside the Elizabeth River was completed in 2012, and in 2017 two more Phases will be opened to the public. Elizabeth’s urban river remains one of Groundwork Elizabeth’s main focus areas today, as this valuable resource will continue to provide many benefits for the community and its visitors.

The long-term vision for the Elizabeth River Trail project is to connect people with the natural environment in the most densely populated region of the country. Through signage and service learning events, residents and visitors will learn about ecological restoration plans for the river and become environmental stewards of this valuable resource. Ultimately, the trail will tie into the regional network of greenways already established and under construction.

Over the years, Groundwork Elizabeth has leveraged various funding sources to make major improvements along the River. Through the National Recreational Trails grant program, Groundwork Elizabeth worked with local artist Dario Scholis to install a series of works made from recycled signs. In 2012, Phase 1 of the River Trail was completed after a series of neighborhood charrettes in which residents had the opportunity to help design the quarter-mile-long trail. The project took longer than anticipated because of a series of obstacles. Though the trail is technically built on County land, the city of Elizabeth takes the primary role for trail maintenance. Groundwork Elizabeth and its partners are continuing to further develop the trail in phases. The phase now underway will continue the trail through the center of Elizabeth to connect to another trail at the Arthur Kill River.

Currently, the Elizabeth River Trail serves one of the largest high schools in the country; thousands of students at Elizabeth High School use the trail to get to and from school. The trail connects business and residential districts and provides access to two shopping districts. Groundwork Elizabeth estimates that approximately 10,000 people use the trail each month. The trail connects diverse demographics, serving a city that is primarily lower- to middle-class, 65% Hispanic, and 20% African American.

Groundwork Elizabeth hosts community events along the river, including trash clean-ups and wildlife identification training. It provides job training through its Green Team program, which serves 10 to 12 high school-age youth at any given time, by involving the youth in trail maintenance, water quality testing, and community engagement activities. Green Team members conduct research along the river, including collecting life histories of elderly area residents, performing basic water quality testing with equipment provided by Rutgers University, and mapping and identifying a previously unknown tributary connecting the river with a pristine wooded habitat area.

Urban Waters funding from the US EPA (2014-2016) has enabled Groundwork Elizabeth to expand its Green Team to a full year-round program with one session per week and to build a new Nature Center where interactive educational activities will be held. Groundwork Elizabeth also negotiated with federal partners, including the National Fish and Wildlife Service and the Army Corps of Engineers, to develop plans to install native plants along the riverside berms, which benefit the local ecology while also helping to mitigate flooding and preserve the structural integrity of the berms.

Long-Term Impacts and the Future of the Trail

Future plans for the Elizabeth River Trail include installing canoe launches and additional educational outposts as trail construction continues, and implementing habitat restoration plans along the only green section of the berms installed by the Army Corps of Engineers. Groundwork Elizabeth is continuing to expand educational programming at the Nature Center (located at the Peterstown Community Center), creating interactive pieces on the history and ecology of the river. As permitting for the project moves forward, Groundwork Elizabeth will continue to build habitat along the river, as well as more recreational opportunities for residents and trail pedestrians, including fishing, boating, and lookout points. Groundwork Elizabeth estimates that while 15% of the project is complete, 40% is well underway. Additional connections have been made with the US Fish and Wildlife Service, which will help Groundwork establish green infrastructure projects along the riverbanks as a way to reduce water pooling and as a learning laboratory for the public. Next steps include more water quality testing, addressing pollution sources, and connecting the River Trail with the newly discovered pristine wooded area near Elizabeth.

Most of the high-school aged youth who became members of the Green Team had never been exposed to the outdoors and had little knowledge of environmental science. Working on the River Trail project, the youth were surprised to find so much wildlife right in their own backyards, and they developed a newfound appreciation for urban waterways. Developing new interests and leadership skills, several students have gone on to study conservation-related fields. Groundwork’s efforts have also increased public participation, as well as the investment of federal, state, county, and local officials and agencies. In the process of further planning and development of the trail networks and regional waterways, it will be vital to consider the implications of climate change, and to plan for hazard mitigation in the event of hurricanes and other natural disasters. 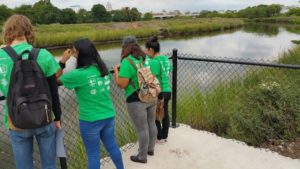 The mission of Groundwork Elizabeth is to bring about the sustained regeneration, improvement and management of the physical environment by developing community-based partnerships which empower people, businesses, educational institutions and other organizations to promote environmental, economic and social well-being.