This study was conducted as part of a partnership between the Federal Reserve Bank of Philadelphia and Princeton University and supported in part by a grant from the National Institute of Health (NIH). It takes an in-depth look at how neighborhoods in Philadelphia have been affected by gentrification, focusing on to what degree the phenomenon has affected the mobility and displacement of residents. While displacement rates were found to be relatively low overall, the study’s findings show some intensification of poverty rates in non-gentrified neighborhoods. Also, the least affluent residents who did move relocated to poorer neighborhoods on average. By focusing on Philadelphia and comparing this city’s mobility rates with other gentrification and displacement studies, it becomes evident that the effects of gentrification are extremely complex and can affect populations in a variety of ways depending on income level and other demographics. 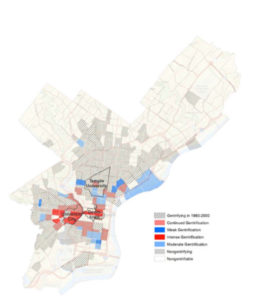