The Importance of Messages

The adage that “one person can make a difference” is really true. Many environmental problems are caused or exacerbated by individual human behaviors. The question is, how do you get enough people to change their behaviors, especially when they’ve been doing something the same way for a long time? Signs, campaigns, and public service announcements can help to sway individual behaviors in the right direction; but, as social marketers know, how messages are crafted is important, down to the phrasing and fonts used. In psychology and the social sciences, there is a vast amount of research on why some messages are more effective than others.

The Barr Lake and Milton Reservoir Watershed Association (BMW), with members from wastewater agencies, cities and counties, water providers, environmental groups, planning agencies, and recreational interests, believed that if Colorado residents knew how their daily choices affected the watershed, they would be more mindful and actively reduce pollution. In 2012, BMW was awarded an Urban Waters Grant from the EPA to develop and test clean water messages, including Spanish translations, and implement an ongoing messaging campaign.

Nearly half of Colorado’s population—2.5 million people—live in the 850-square-mile Barr-Lake/Milton Reservoir Watershed that encompasses Denver, Aurora, Littleton, and Englewood, and includes not only the South Platte River, but 500 streams and 550 canals. In 2002, the Colorado Department of Public Health and Environment (CDPHE) included both reservoirs on the State’s 303(d) list of impaired waters for exceeding the upper pH limit, possibly inhibiting survival of key aquatic life. BMW found that 90% of the pollution in the watershed was caused primarily by wastewater treatment plant effluent. BMW wanted to work with its partners to raise awareness about individual behaviors that can help protect water quality. While individual behaviors were not the source of most of the pollution, BMW hoped that developing useful, impactful messages would generate public support, thereby encouraging local officials, utilities, and the state government to initiate greater efforts to improve water quality.

To evaluate public opinion and awareness of the issue of water quality and determine the project focus, BMW partnered with three groups—the Colorado Water Conservation Board (CWCB), the Greenway Foundation’s PURE program, and Metro State University’s One World One Water program. Through existing survey data and focus groups, they found that 16% of Denver residents did not know that the South Platte River runs through the city. Once informed, residents seemed interested in protecting and rehabilitating the watershed — and, importantly, they expressed a willingness to chip in as much as $10 per month on their utility bills to fund water rehabilitation programs.

Since the single greatest problem facing the watershed is an overabundance of nutrients from fertilizers and organic waste, BMW developed messages with two main goals: to curb dog waste and reduce use of fertilizers containing phosphorus. BMW worked with BBC Research and Consulting to develop eye-catching and edgy images, signs, and sculptures that would help educate the public about the effects of these pollutants. One of the mobile sculptures—a giant straw paired with the message “think about your drink”—toured the state and was seen by one million people. BMW made available 100 flash drives with useable marketing materials for all partners to launch in their own way. Earth Force became involved in touring with the straws. The City of Aurora incorporated the messages into a Facebook campaign, while the City and County of Denver used the messages to re-brand outreach activities. An Arapahoe County group called Stormwater Permittees for Local Awareness of Stream Health (SPLASH) posted the messages on its website and installed one of the straws in Geneva Lake in Littleton. BMW posted the campaign on its website, with the tagline “Please make our messaging work for you.”

The Future of Water Quality in Colorado

One of the best outcomes of the messaging project was to bring together Metro Denver residents to work collaboratively. The project also led to an effort, spearheaded by the Colorado Stormwater Council, to request state funds to implement a statewide messaging campaign. Despite massive collaborative efforts, evidence that Colorado residents would support water quality initiatives, and the recent publication of a Colorado Water Plan emphasizing the need for a statewide campaign, the state has not supported the funding request. Looking ahead, the Colorado Stormwater Council plans to engage more partners and utilize BMW’s messaging. Eventually there will be initiatives that the public will vote on regarding funding to protect Colorado’s water resources. With this active messaging, an informed public is more likely to support the funding needed for a massive rehabilitation of the watershed. 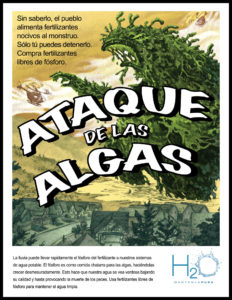 The Barr Milton Watershed Association (BMW) is committed to keeping the water in Barr Lake and Milton Reservoir clean. BMW uses a collaborative approach to make decisions where all voices can be heard. Nearly half the people in the state live in the BMW watershed.