Once a thriving tidal river, the Eastern Branch of the Elizabeth River became known as the lost branch when it fell from public awareness. Stemming from this lack of awareness, it also became one of the most polluted tributaries in the watershed. The Elizabeth River Project and partners have set out to change that, with public awareness campaigns and multi-sector partnerships to restore urban shorelines with native oysters. Because of these efforts the Chesapeake Bay Program now recognizes the Eastern Branch of the Elizabeth River fully restored for oyster habitat; and there have been significant improvements in water quality demonstrating that large-scale restoration with multiple community partners can restore a once dead urban waterway.

Eastern Branch of the Elizabeth River

The Elizabeth River is a tidal estuary in Virginia that has four branches—the Western, Southern, and Eastern Branches as well as the Lafayette River. The Eastern Branch watershed is 40 square miles and flows through the cities of Virginia Beach, Chesapeake, and Norfolk. What was once a thriving tidal river with sailing ships and abundant oyster reefs, has more recently been known as the lost branch, because it is difficult to publicly access and out of sight of public awareness.

Restoring Oysters in the Eastern Branch 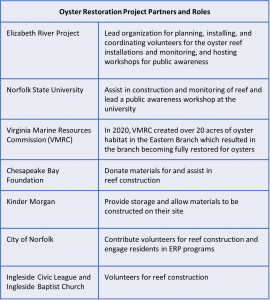 With funding from a National Fish and Wildlife Foundation (NFWF) Five Star and Urban Waters grant, ERP and partners contributed to the oyster restoration goals in the Eastern Branch. The project aimed to restore five acres of oyster reefs to the river shoreline  to filter pollutants while also providing crucial habitat for native fish. A multi-sector partnership between nonprofit organizations, a state agency, learning institutions, local government and businesses in the region allows for a diverse range of involvement in the restoration process that shifts the responsibility of improving environmental conditions in the watershed to the whole community.

During the COVID-19 global pandemic, ERP was able to receive permits for reef installations, recruit volunteers from multiple community organizations, and worked with students from the Biology Department of Norfolk State University (NSU)—which is an historically black university—to raise awareness about oyster restoration.

Work resumed in 2021, and ERP enlisted about 100 volunteers for reef installations using 3,500 oyster substrate pieces from Allied Concrete, Grow Oyster Reefs, and Sandbar Oyster Company, and 50 cubic yards of oyster shell seeded with spat (20 of which came from the Chesapeake Bay Foundation’s shell recycling program). Once the reefs are constructed, they are monitored for growth and habitat stability with help from students from Norfolk State University.

Because of ERPs focus on the Eastern Branch as well as the partnerships working to raise awareness in the watershed (see the River Star Homes program), the 2020 State of the River Scorecard reports an improvement from D to C. Specifically, the oyster installation project contributed to restoration efforts in the Eastern Branch more broadly; as a result, the branch was declared the second river in Virginia to meet oyster restoration goals in 2021.

“Norfolk State University is proud to have the opportunity to work with the Elizabeth River Project on oyster-related restoration projects. Through our collaboration, NSU students have come to appreciate the importance of oysters in our ecosystem and their role in restoring the River. It has also been a great way for students to connect with community members and participate in meaningful service, while learning how to be engaged scientists.” ~Ashley Haines, Associate Professor in the Department of Biology at NSU

Through years of restoration efforts on the Eastern Branch of the Elizabeth River, ERP has been able to raise public awareness of this urban water resource. And, they haven’t done it alone. Multi-sector and diverse partnerships through the NFWF funded project have allowed them to install five new acres of restored living oyster shoreline and contribute to reaching the overall oyster restoration goals for the watershed.

The National Oceanic and Atmospheric Administration (NOAA) has identified oyster restoration as a key ocean conservation strategy for the multiple benefits they provide, including providing habitat for other species, acting as filters for polluted waters (a single oyster can filter 50 gallons of water per day!), and providing natural storm protection for shoreline communities. To support living shorelines of this type, the Oyster Restoration Workgroup provides resources and considerations for constructing and designing living shorelines:A Practitioners’ Guide to the Design and Monitoring of Shellfish Restoration Projects:An Ecosystem Services Approach. There are a variety of materials that can be used to construct new oyster reefs depending on the scale of the project, including concrete oystercastles, discs, and tiles, bagged clean shells, and large boulders of limestone rock. Once the reefs are constructed and seeded with oyster spat, monitoring is an equally important step in order to compare projects and determine the success of the installation: Oyster Habitat Restoration: Monitoring and Assessment Handbook. Many coastal locations around the United States are working to restore living shorelines by constructing and rebuilding oyster reefs on different scales. Check out the following examples: 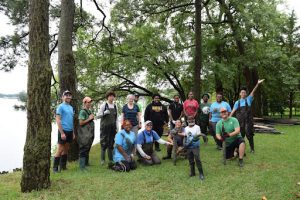