“In an era rocked by climate change and other large-scale disruptions, our cities must be resilient in order to survive and thrive. But what does that mean, exactly? What is known about urban resilience, and what remains to be explored? And how can we put thinking into practice to create the resilient cities of the future?

To help answer those questions, Island Press launched the Urban Resilience Project in 2013, with support from The Kresge Foundation. We began with a survey of the existing literature on resilience and reached out to a diverse group of organizers, researchers, planners, and other urban change agents. In a series of interviews and an all-day assembly, we listened deeply to what they had to say. This report endeavors to capture what we learned.” 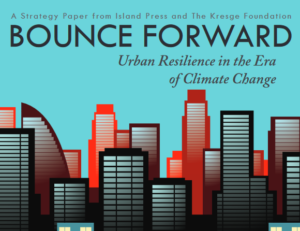