This year, the team members of the Urban Waters Learning Network are digging deeper into a topic that has long been a concern of our members: the gentrification and displacement of people that we see taking place in our urban communities, oftentimes following efforts to revitalize and reinvest in the places we call home. We are addressing these topics by surveying our network members and by producing blog posts, webinars, impact stories, and other resources. The following is the third blog in a series focusing on anti-displacement (follow the links to the first and second blog posts). 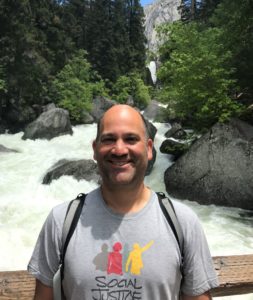 n addition to supporting the Urban Waters Learning Network, I am also a college-level geology teacher. In that other life, I introduce students to water resources and assign a research project about environmental problems related them. Over the years, I have heard feedback from the students that the issues—like the water crisis in Flint or flooding in the Mississippi River watershed—are “frustrating” or “discouraging,” especially when looking beyond the natural geologic processes and into the social and economic impacts related to them.

In response, I take a very Fred Rogers approach and tell them: “Look for the helpers.” Living Cully, a multi-sector partnership that is helping socially, environmentally, and economically in a disinvested neighborhood of Portland, OR, is one of the best examples of a “helper” that I have come across in recent months.  I couldn’t help but be energized and uplifted by a recent conversation I had with Tony DeFalco, Executive Director of Verde (the organization that works as the “backbone” of the Living Cully partnership) and his insights about the work of Living Cully.

Living Cully as a Model: Who are They and How do They Do It?

“Work hard. Prove the model, the concept. Build the relationships with people in partner organizations. Expect that it’s not going to be perfect. Don’t give up on trying to institutionalize the changes.” ~Tony DeFalco

The Cully neighborhood has a population of over 13,300 people and is the most diverse census tract in Oregon. The neighborhood was annexed to the city of Portland in 1985. Still, only 34% of streets in the neighborhood have sidewalks, only 24% of residents live within a quarter mile of a park when the regional average is 49%, and 30% of the residents live in poverty, more than double the citywide rate in 2010 of 13%.

With the intent of improving these conditions and uplifting the community, Living Cully was created through the collaboration of four organizations: Habitat for Humanity Portland/Metro East, Hacienda Community Development Corporation, Native American Youth and Family Center and Verde. These organizations work together in the Cully neighborhood to support environmental infrastructure investment side-by-side with anti-displacement strategies, so that economic, social, and environmental goals are strengthened by each other. Their work is guided by a memorandum of understanding first signed in 2010 and amended in 2013.

In 2013, the Living Cully Partnership established a summary of anti-displacement recommendations in a report entitled Not in Cully: Anti-Displacement Strategies for the Cully Neighborhood, in cooperation with Portland State University. The document outlines the gentrification/displacement dynamic happening in the Cully neighborhood and proposes three main priority anti-displacement strategies: affordable housing, retaining local businesses, and economic self-sufficiency. DeFalco was clear that the most successful strategy to avoid displacement of people is pairing environmental investments—new parks, bike lanes, improvements to air quality, etc.—with affordable housing.

Cully Park officially opened to the public on June 30, 2018; but the inception of the idea started with Portland Parks and Recreation in the year 2000. That is when the city acquired the land—a former 25-acre landfill—with the intention of creating the first park in the Cully neighborhood. While the city completed a Master Plan in 2008 for creating a park, lack of funding prevented its implementation. In 2010, Verde organized Let Us Build Cully Park! and advocated for funding and construction. In 2012, Portland City Council approved a partnership between Parks and Recreation and Verde, whereby Verde acquired the right to develop the park.

With Verde as the lead, the organization surveyed members of the community to understand what elements of the park were most important to them. Survey participants indicated that they wanted to be involved in the design; but, perhaps the more important response was that they wanted to see jobs being created in developing the park. Using the survey results as guiding principles for park implementation, there was meaningful community engagement in the design of the park as well as significant investment in the community. About 70% of park funds went to minority and women-owned businesses and 10% of wages in building the park went to people in the neighborhood. This procurement achievement demonstrates how environmental investments can also have economic co-benefits.

[Sidenote: Find more information about policies that support equitable economic development as well as the economic impact of the Verde Landscape social enterprise, see Jobs and Equity in the Urban Forest, a report by Ecotrust and Policy Link.]

It took six years to build Cully Park. DeFalco said that it was “important to go slow,” not only because it was a complicated and expensive project, but also because Living Cully was very explicit about bringing new affordable housing to the same area. During the six-year time period, the organization was successful at creating 200 units of affordable housing in Cully. And, in large part through community advocacy from Living Cully, the City of Portland passed an ordinance in August 2018 that recognizes mobile home parks as affordable housing options. Passage of the ordinance makes mobile home parks less vulnerable to redevelopment and protects residents in the Cully neighborhood as well as nearly 3000 families across the city.

A 2015 report by Ecotrust and Economics for Equity and Environment entitled Verde and Living Cully, A Venture in Placemaking summarizes:

“The accrual of well-designed projects and well-targeted investments that meet local needs, coordinated through a coalition of committed partners with high organizational capacity and a shared vision of neighborhood revitalization, is the key to the success story currently unfolding in Cully. The ability of Verde and its partners to avoid the eventual displacement of vulnerable, low-income residents is not guaranteed. However, the accomplishments to date of Verde and its partner in Living Cully demonstrate the promise and the possibility that a low-income neighborhood, initially poor in amenities and services, can be revitalized for the benefit of all its residents.”

The impacts of Living Cully’s work reflect the recurring theme that strong partnerships and effective community engagement are key strategies to addressing the impacts of gentrification and anti-displacement – a theme I’ve uncovered again and again during my research. And, it especially puts an emphasis on pairing affordable housing with infrastructure investments. Because investments in environmental improvements (i.e. green infrastructure, water quality and access, etc.) are most likely to continue and increase into the future, this kind of partnership is necessary to ensure that the residents who are living in disinvested communities benefit from their revitalization. DeFalco shared, “…that toolkit [Not in Cully] is there now and there is no excuse to create those kinds of investments without co-benefits.” It’s a powerful message: we can always do more to take care of one another and the environments in which we live.

“We live in a world in which we need to share responsibility. It’s easy to say ‘It’s not my child, not my community, not my world, not my problem.’ Then there are those who see the need and respond. I consider those people my heroes.” ~Fred Rogers

Other Lessons on Partnerships and Community Engagement:

When I asked Tony DeFalco for advice he might give other organizations working in similar settings, he had some great information to share. Below are a few of the important points that stood out from our discussion.

2 Responses to ““Look for the Helpers”: The Living Cully Partnership”