“Diversity and Inclusiveness” was one of the main themes at the 2016 River Rally in Mobile, AL.

This represents a growing movement, consisting of people from all walks of life, who recognize that we need representation from a larger variety of people, especially those who grew up experiencing the worst effects of environmental problems. This includes people of color, and people from low income backgrounds: those who come from rural and urban communities that have the least political representation, who deal every day with hazards related to contaminated homes, workplaces, playgrounds, and schools, and who are on the front lines of big issues like climate change. This also includes people of various abilities, LGBT status, gender identity, etc. Diversity of all kinds is so important because we can come up with better solutions to problems when we have a variety of perspectives and experiences at the table. 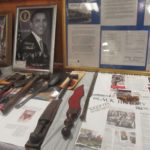 A portion of the exhibit at The Den, Africatown, Mobile, AL 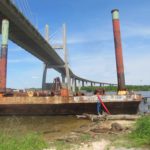 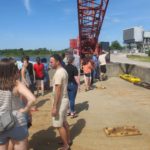 Africatown residents are surrounded by encroaching industrial operations, such as this one, which blocks the view of a nearby bayou and wetlands area.

Africatown is a community founded by formerly enslaved Africans after they arrived on Alabama’s last slave ship in 1859, 52 years after the importation of slaves was banned. Residents of the community have maintained a rich collection of historical artifacts and documents in the “den”, a school and museum. This historic community continues to fight against industrial encroachment and also deals with a range of environmental justice issues including limited access to the Mobile River, contamination of land and nearby waterways, and development that runs counter to community interests. For more information, visit the Mobile Environmental Justice Action Coalition website.

The American environmental movement has a history of being insular and operating in silos. Mainstream discourses discussed the environment as something separate from where people actually live; a static, unchanging place where humans shouldn’t tread, whose conservation impeded human progress and industry. Industry was portrayed as inherently adversarial, as well as population growth, development, and other human activities. Meanwhile, indigenous rights advocates, community organizers, and social justice warriors were fighting for their communities, for clean places to raise children, for survival and sovereignty — and struggling for a voice within the dominant discourses. As Derrick Evans (Managing Advisor to the Bridge the Gulf Project and 2016 River Hero Award recipient) said at River Rally 2016, “Separation of the human experience and the environment has caused the destruction of both.” Now that more communication is happening, linking human rights and environmental concerns, we can move past these dichotomies and come together to create a more effective, more informed movement.

While at River Rally 2016, I participated in a few different discussions on the theme of diversity and inclusiveness. Below are a few concrete takeaways from the experience:

There was a word that kept popping up at the 2016 River Rally: intersectionality. This is a great word to know. It describes the way in which oppressive institutions— any system built upon discrimination or xenophobia— are interconnected. Because they are interconnected, they can’t be treated like separate islands. In other words, everyone who genuinely wants to work toward social and environmental justice can’t just say, “Oh, that’s not my problem,” or, “That experience doesn’t affect me, so that’s not my fight.” Actually, it is your problem, and it is your fight. Like a few other people said at this River Rally: someone always lives downstream of someone else.